Liposuction: What can it do for me?

Foothill Dermatology Medical Center Blog Liposuction: What can it do for me?

Liposuction is a type of surgery used to remove fat. By removing a small amount of fat, it’s possible to reshape just about any area of the body.

Areas you can reshape 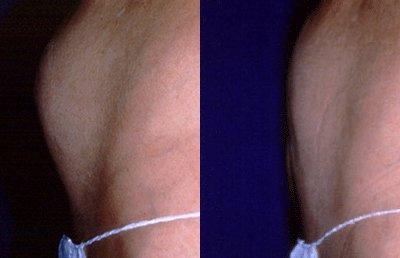 Many people have a type of liposuction called tumescent (to-mes-cent) liposuction. It’s often used to:

But it can do much more.

Dermatologists also use tumescent liposuction to reshape the:

If someone has a hollow-looking face due to HIV, removing fat from another area of the body and injecting it into the face can help restore facial fullness.

To reduce excessive sweating, a dermatologist removes much of the fat in the armpits. Most of sweat glands in the underarms are found in the fat, so this can greatly reduce sweating. Because this removes sweat glands, it is a permanent solution.

What liposuction should not treat

While liposuction has many uses, it is:

If you are thinking about having liposuction to reshape an area of your body, dermatologists recommend tumescent liposuction. It reduces many risks possible with traditional liposuction.

The benefits of having tumescent liposuction rather than traditional liposuction include less recovery time, bleeding, and bruising.

Tumescent liposuction is also less expensive, which can save money. Insurance generally doesn’t cover the cost of cosmetic (done to improve your appearance) procedures.

What’s involved in getting tumescent liposuction?

Before removing fat, your dermatologist will inject large amounts of a liquid into the area to be treated. This liquid contains an anesthetic to numb the area so you won’t feel anything and medicine to minimize bleeding.

Once injected, the area will swell and feel firm.

When your dermatologist finishes, you’ll feel alert and be able to function. You will, however, be monitored in the office for a while. When it’s safe for you to go home, you’ll need someone to drive you.

Is there downtime after tumescent liposuction?

Most people need a few days to recover at home before returning to work. You’ll likely have some pain and swelling after tumescent liposuction.

Be sure to ask your dermatologist how much downtime you can expect and when you can return to activities like work and exercise.

You’ll likely need to do some self-care at home. This may include wearing a compression garment to reduce swelling or taking antibiotics to reduce the risk of an infection. If your lower legs were treated, you may need to elevate your legs.

Your dermatologist may also require you to start walking the day after surgery. This can reduce the risk of developing a blood clot.

When do people see results?

You may notice some improvement immediately after the surgery, but it takes months to see your final result.

How long do the results last?

The results can last for years. If you gain weight, however, the results may be less noticeable.

What are the possible side effects from tumescent liposuction?

It’s common to have swelling, bruising, and numbness immediately after the procedure. These are temporary and usually go away in a few weeks.

As the area heals, you may see a scar where your dermatologist inserted the hollow tube. This, too, tends to fade with time.

Lumpiness, dimpling, and loose skin are also possible but rare in skilled hands. A dermatologist can usually correct these if they develop.

Other more serious side effects can occur when the person performing the procedure lacks training and experience. That’s why it’s so important to choose a board-certified doctor who regularly performs tumescent liposuction.

Who gets the best results from tumescent liposuction?

The people who tend to get the best results:

If you’d like to know what tumescent liposuction can do for you, you should make an appointment to see a dermatologist.

Even if you feel that you are not a great candidate, this appointment can be helpful. A dermatologist can speak with you about your concerns and tell you what may give you the results you seek.

Choose the specialty of Cosmetic dermatology.

Who should provide your cosmetic treatment

Image (before and after): Used with permission of the American Academy of Dermatology National Library of Dermatologic Teaching Slides.