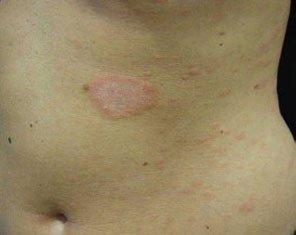 Pityriasis rosea: This common skin disease causes patches on the skin. Your dermatologist may call the large patch a mother patch. The smaller patches are daughter patches.

Pityriasis rosea: This common skin disease causes patches on the skin. Your dermatologist may call the large patch a mother patch. The smaller patches are daughter patches.

Pityriasis rosea (pit-uh-rahy-uh-sis row-zee-ah) is a common skin disease that causes a rash. This rash usually disappears on its own without treatment. You can expect to see the rash for about 6 to 8 weeks. Sometimes the rash lasts much longer.

Some people who develop this rash see a dermatologist to get treatment for the itch.

If this rash appears during pregnancy, a woman should tell her doctor.

When people get pityriasis rosea, they often have the following signs (what you can see) and symptoms (what you feel):

Some people feel poorly when they have pityriasis rosea.

Pityriasis rosea: Who gets and causes

Who gets pityriasis rosea?

People of all ages and skin colors get pityriasis rosea, but this skin disease is more likely to occur:

No one knows what causes pityriasis rosea. Research shows that it is not an allergy. We also know that fungi (plural of fungus) and bacteria do not cause this skin disease. A virus may be the cause, but researchers have yet to prove this.

How do dermatologists diagnose pityriasis rosea?

A dermatologist is usually the doctor who diagnoses pityriasis rosea. The rash is often easy for a dermatologist to recognize, but not always. In some patients, this rash can look like another skin disease. It can look like ringworm or a type of eczema called nummular dermatitis.

How do dermatologists treat pityriasis rosea?

Pityriasis rosea usually goes away without treatment. You can expect to have the rash about 6 to 8 weeks before it disappears. Some people have it for 2 weeks. Occasionally, it lasts longer than 8 weeks.
If a patient has unbearable itching, a dermatologist may prescribe a medicine to help relieve the itch. Sometimes a dermatologist prescribes light treatments for the itch.

The rash usually goes away on its own, leaving no trace. Some people with dark skin see flat, brown spots after the rash clears. These spots may last for months, but they eventually fade.

Most people never have another outbreak of pityriasis rosea.

If you suspect that you have pityriasis rosacea, dermatologists recommend that you:

© 2019 American Academy of Dermatology. All rights reserved. Reproduction or republication strictly prohibited without prior written permission. Use of these materials is subject to the legal notice and terms of use located at https://www.aad.org/about/legal